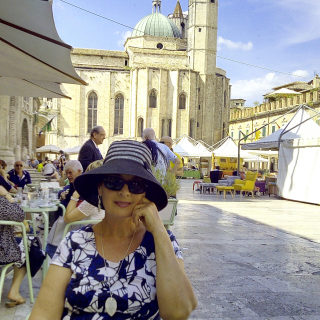 I have been living in southern Le Marche for 14 years, and I adore it, it really feels like my home now. The countryside is stunning, the hilltop town of Montalto delle Marche is medieval, beautiful and important historically in the region. It lies on a ridge between the majestic Sibillini mountains and the popular beaches of the Adriatic riviera. And the people are real genuine Italians. I never tire of gazing at the natural beauty of this place, and hope you also enjoy the photos I have taken. If you want to come and see Montalto delle Marche for yourself, I can help with accommodation. Please come and visit us soon.

It’s harvest time in Le Marche, and with 2018 being the European Year of Cultural Heritage, it seems appropriate to talk about the ample bounty of nutritious food produced from these hills of pale limestone and taupe clay, fecund Mother Earth and the amazing people who make it happen.

It’s a very old way of life that gives rise to these beautiful patchwork fields we gaze at all around Montalto delle Marche.

By the end of August, the stone fruit from the valleys has been taken in, with sweet peaches and nectarines being eaten every day in my house; the cherries have been and gone sadly, but the figs and plums are now in, leaving the apples still ripening on the trees. The grains have been harvested & stored, or sold, leaving corn and sunflowers about to be gathered.

Beet and sorghum provide winter fodder for cattle, and ‘erba medica’ (alfalfa) is being cut and turned to dry in the last of the hot sun. Tomatoes, onions, carrots, potatoes, eggplants, lettuces, zucchini and legumes amongst other vegetables are still producing well, pumpkins are ripening on the ground, nuts are almost ready, and the winter crop seedlings are planted in the soft tilled earth.

The grapes will be harvested this month during the vendemmia, then the olives taken for oil and for eating in October.

Here in Southern Le Marche we have high mountains, steep ravines, gushing rivers and tinkling streams, rolling hills and gentle valleys smoothing out down towards the sea coast.

Even with the many pockets of beautiful natural forest, which are protected by law and great for hunting, we have one of the highest levels of cultivable land in Italy.

The farming destiny of the Marchigiani people has been written for centuries in these sweet hills, ‘le dolci colline’, which are served well by the abundant fresh water from the rivers, keeping the people and the land alive and bringing nutrients down from the mountain-tops to the fields below.

All around this pretty countryside I am constantly impressed by the intensity and neat lines of cultivation, and by the endless supply of quality produce. I love to watch the soft breezes moving across the fields of grain, rustling the tall stands of corn and feel the hot sun baking the heavy sunflower heads. Everything is ripe for the picking at harvest time.

The farms here are small holdings mainly organically run by families with long histories and innate expertise. True farmers, it’s in their blood and they are proud of their lifestyle. They are hard workers, physically strong and muscular, as well as kind and generous of spirit. It’s nothing to see an 80 year old nonna outside in the hot sun, her head sensibly covered, working on her farmhouse orto, purposefully pushing a loaded wheelbarrow or clambering up the hill to help pick grapes during vendemmia. Is there any wonder this region of Italy has an above-average life expectancy?

I have learned about the Mezzadria from local historian Gianluca Vagnarelli, whose family was involved in this particular share-cropping system for generations; and it greatly amplified my respect for these ‘salt-of-the earth’ people, descendants of the Mezzadri.  (Gianluca has allowed me to use some of his family’s photographs here).

Mezzadria (a contractual sharecropping system) existed in Central Italy since the 14th century, when, with a resurgence in population after the Black Plague, it provided poorer families with a home, work and food; they may otherwise have been destitute. It also gave the landowners a steady supply of food, and provided caretakers for their animals and land. The summer harvest was a very important time for all concerned.

The Mezzadria share-cropping deal was a pact based on a 50/50 principle – the landowners received 50% of all yield raised, and the peasants received 50%, a house and enough produce to feed the family and with which to barter. It was a no-money system, that sadly was open to abuse as human systems often are. But if you had a good landlord, life wasn’t too bad.

Many an old farmhouse, a ‘casa colonica’, lie dotted around the countryside mainly used for storage nowadays. They were large practical structures, with a telltale outdoor staircase to the upstairs level, where often as many as 45 people were housed. The animals were kept on the ground floor, especially in winter, to keep the humans warm upstairs. The family was always close at hand to give assistance when an animal was giving birth. All members of the family, even young children, had specific roles to play.

(If you are interested in researching Mezzadria further, please contact Gianluca on Google or his Facebook site, Mezzadria Stories. He is a mine of information on this subject).

These families worked together, ate together, celebrated together and slept together, maintaining very strong bonds. As well as being excellent farmers, shepherds and horticulturists, they were completely self-sufficient; expert artisans in weaving cloth, cheese-making, the hygienic preservation of fruit, vegetables and meats, basketry, furniture-making, shoe and hat making. All the time keeping ditches and roads clear and protecting the environment. Nothing was wasted, all life was cherished. These qualities and skills are still inherent in the people of Le Marche today.

The sharecropping system began to die out when the industrial age began. It was basically a system that was open to abuse, and workers were eventually attracted to the shiny new city factories where they were offered easier work and would be paid in cash. A large portion of the peasant workers walked off the land, abandoning these hills and their agricultural roots, but some local peasant farmers stayed contracted until the 1980’s. The landowners lamented the loss of expertise and skills. Luckily for us, though, farming is still a viable lifestyle, and the land continues to give up it’s wonderful yield.

Every summer many workers, originally born in this town but now living in cities like Milan and Rome, return to Montalto where they stay together in family-owned houses. They love coming back home, to celebrate summer with people who have known them since they were children. They enjoy immensely the local festivals, the food and going to the beaches. They are proud and nostalgic for their ‘paese’ or homeland, and their ‘aria nata’  or birth air. Eventually at the end of their holiday they must go back to the bustle of city life for another year of work, but they long to return. It’s sad to see them go.

I sometimes wonder if they are really happy with their decision.

Many thanks to Gianluca Vagnarelli @ Mezzadria Stories

I have been living in southern Le Marche for 14 years, and I adore it, it really feels like my home now. The countryside is stunning, the hilltop town of Montalto delle Marche is medieval, beautiful and important historically in the region. It lies on a ridge between the majestic Sibillini mountains and the popular beaches of the Adriatic riviera. And the people are real genuine Italians. I never tire of gazing at the natural beauty of this place, and hope you also enjoy the photos I have taken. If you want to come and see Montalto delle Marche for yourself, I can help with accommodation. Please come and visit us soon. View all posts by Annmarie